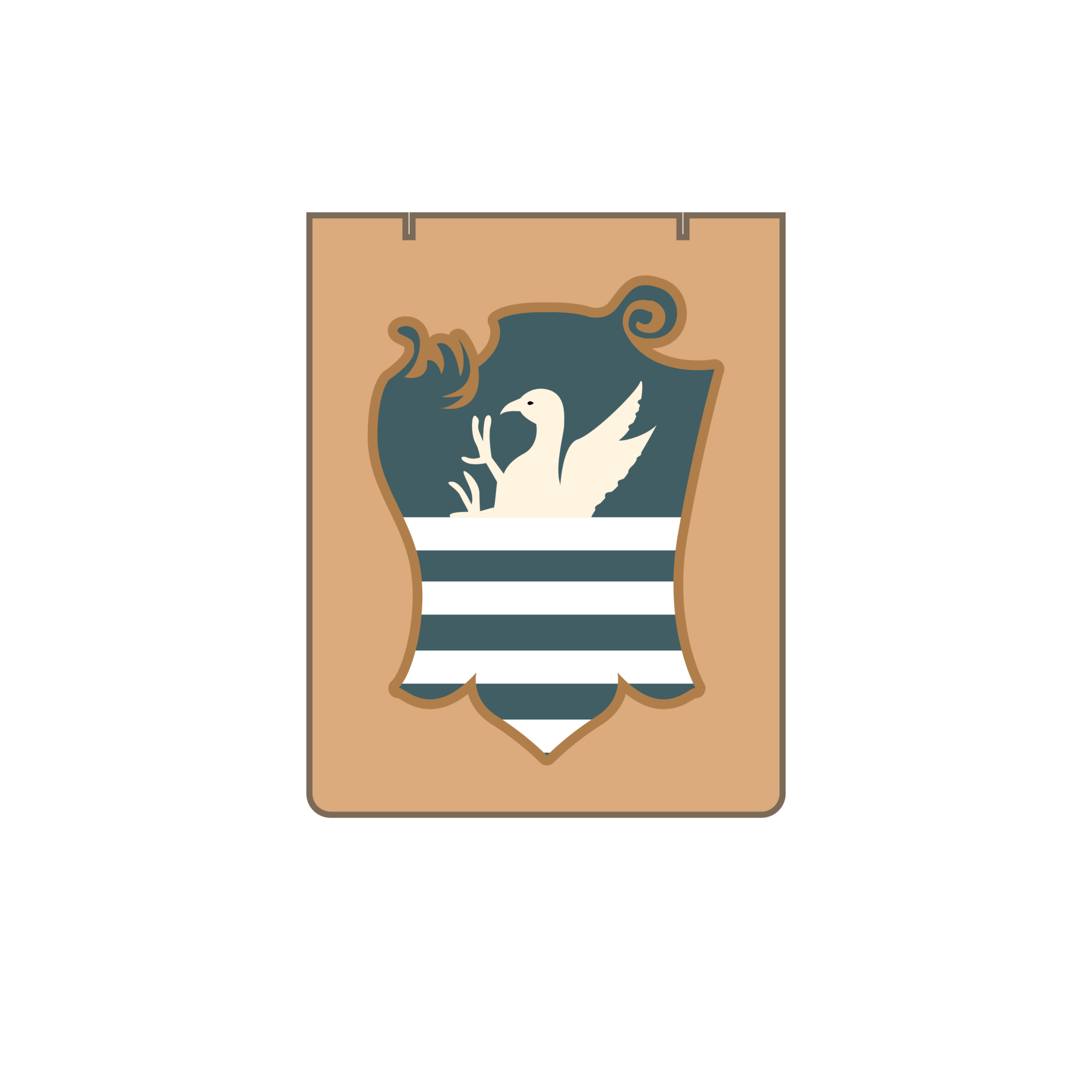 One of the towers of San Gimignano as a house-museum that tells the city. This is the latest project of the Cilemmi Giachi Family, owners of one of the tower-house Chigi opened to private guest. The complex, in the heart of the village of San Gimignano, Unesco Heritage, consists of a house of 300, which incorporates one of the medieval towers that have made famous in the world the town. Already the famous Useppi family, which later became the property of the family Chigi Saracini.

It became a free city in 1199, coinciding with a period of great economic expansion, during the thirteenth century, San Gimignano became home to a rich urban aristocracy, who expressed his political and social statement through the construction of what will become the symbol of city: the towers. Seventy-two examples of such high buildings in fact crowning the village in the fourteenth century, but nowadays there are only fourteen survivors among them emerges the tower Chigi, the only stone and brick tower, located in the main castle, which amazes for its unique views. 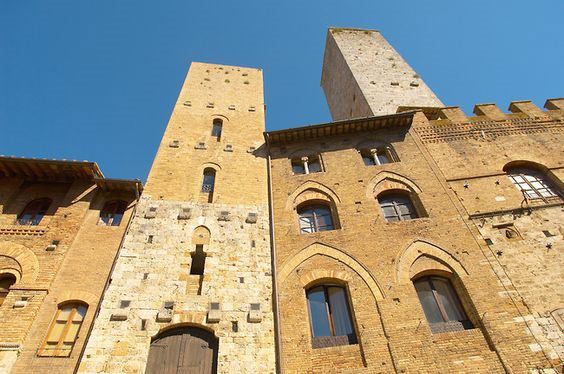 A detail of the tower and the house Chigi

In the project, which mixes tradition and multimedia, itself becomes a storyteller through which to discover the secrets of the typical bourgeois mansions local eighteenth century, while the magnificent village. This is why the Cilemmi Giachi Family propose a visit by includes two distinct phases: the first, the audience is led on a path that provides the tools to know and appreciate San Gimignano and its history, its countryside, its characters and the events of Useppi palace Chigi Saracini. The second part, the visitor is free to move on the main floor and enter the intimacy of a historic family, browse photo albums and letters. There are no barrier furnishings between paintings and objects, free to devote the time he wants, stopping to read or just take a look, to choose what to see, and tells the story of a family among the most important of San Gimignano, rich in contacts with the art world, the work of poetry. 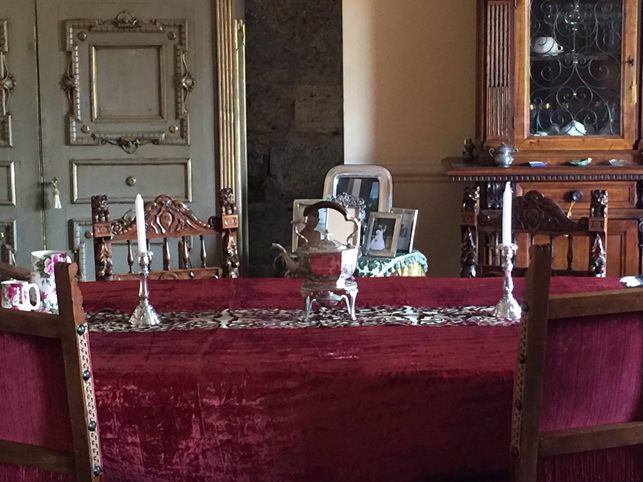 Interior of the house Chigi

The surprise effect that arises as soon as you enter the house-tower is just to perceive the continuity of life, of so many lives in that time have adjusted their domestic vision to the ancient city dominant. One of the few occasions, beyond the extraordinary facades, visit interiors that communicate with the outside world. The landscape context that you can admire from windows into the valley, which testify to the intense relationship between inside and outside, decisive aspect for understanding of the story told because of the relationships of the family with rural entrepreneurship and, more broadly, the sentimental adherence to the landscape. The ultimate goal – explains Emanuele Giachi who realized the project with his family – is to encourage the combination of the Beauty and History. This project is dedicated to those who are eager to fully understand the significance of the beauty that meets or who are simply curious and he wants to invest a bit of their time in a “mild”, yet exciting and engaging. 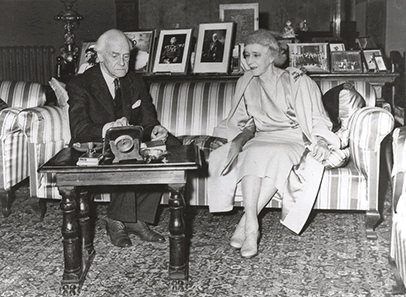 Count Chigi Saracini, founder of the Accademia Chigiana in Siena

The historical heritage of the family, over the years, is added to investments in wine-growing land to enhance the high-quality wine production, sold both in Italy and abroad.

For many years Giachi- Cilemmi family are owners of the Chigi Tower in San Gimignano.

The Chigi Tower is one of the fourteen historic towers of San Gimignano and is located in Piazza del Duomo. The tower, though not very high, is one of the most beautiful in the city. The tower was built in 1280 and belonged to the family and is Useppi Chigi.

The first three floors are covered with stone, well squared cut drafts, which open on the lights with low arches. On the first floor, a typical portal is accessed by a staircase, the legacy of the struggles of the times of the medieval city, when they preferred to sleep safely access-withdrawing building the first floor stairs at night. In the second floor window is a narrow elongated slot with a bow resting on shelves.

Medieval buildings flank the tower: one to the left of particular value for the valuable presence of mullioned windows with nice workmanship. 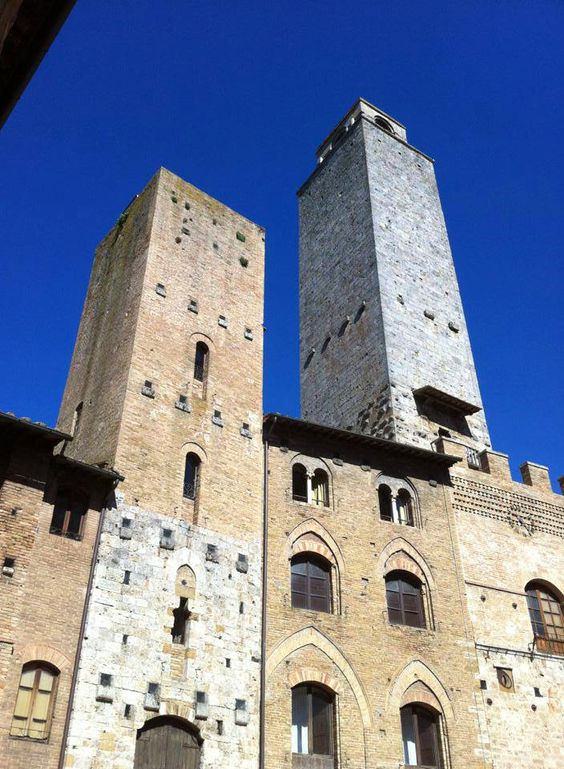 The Useppi were powerful Sienese citizens, owners of many castles. In 1214 they settled in San Gimignano where they went to live in the palace with Useppi tower, next to the Palazzo del Podestà, in the beautiful Piazza del Duomo.

Were politicians in King Ladislao court of Hungary and Bohemia, were Knights of the Order of the Dragon, were diplomats to Emperor Ferdinand III court. Were ambassadors of the Grand Duchy of Tuscany, Ferdinand II.

The family died and the heirs of ownership of Useppi were the noble Chigi Saracini family of Siena. The last representative was the Count Guido Chigi Saracini in Siena, worthy of the virtues of their ancestors, patron of the fine arts.

The Useppi palace still holds today in the interior paintings, tapestries and sculptures of great artistic value. This is a beautiful building of medieval architecture with a stylish and distinctive architectural influences rich facade of Siena and Pisa. If you are in San Gimignano, you can not fail to visit the Palace Useppi.

When you enter inside the court, left the city noises coming from the streets and alleys by the villagers, you feel in another world. Visiting the Tower Chigi Useppi, you will find that here time has not passed. They still perceive the splendor and medieval feasts with ladies decked with magnificent Florentine brocade robes and long hair adorned with pearls and jewels and, with the Knights immersed in spectacular duels that took place in the middle of the main squares, ready to compete with their long spears riding mighty steeds.

The time of past glories, you perceive also along the rooms of the building and overlooking the beautiful mullioned windows, tall and elegant, always ready to demonstrate the ability of the teachers of San Gimignano, in knowing how to draw decorative elements from simple materials like brick and marble Carrara. The arches of the mullioned windows are evident derivations Senese architecture. 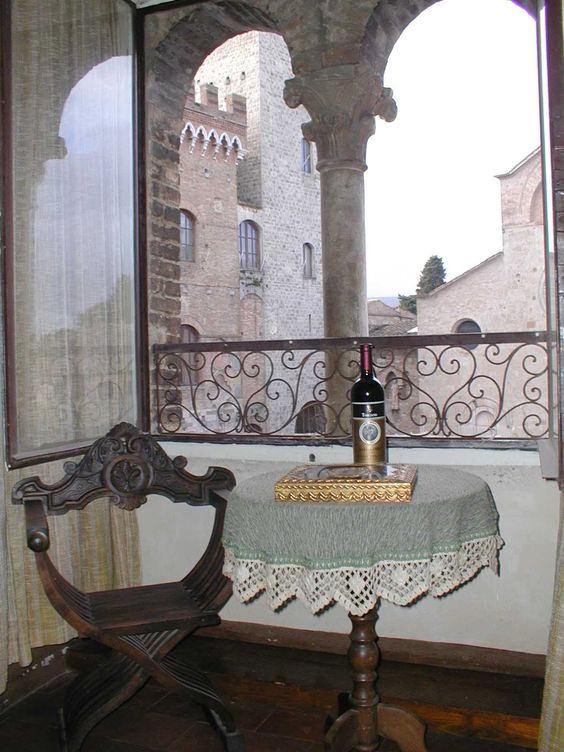 The tower, austere and soaring, has a side embellished with narrow windows with arches, originally were “porticciole” used to give access to the wooden balcony resting on corbels. Here the ladies used to adorn with the tapestries of Useppi during visits to prominent figures, such as Dante Alighieri visit, Lorenzo de Medici, Machiavelli the great Florentine secretary at the Medici court, the spirited Dominican preacher Girolamo Savoranola, illustrious Florentine artists such as Domenico Ghirlandaio, Benozzo Gozzoli and many other characters who frequented San Gimignano of yore. 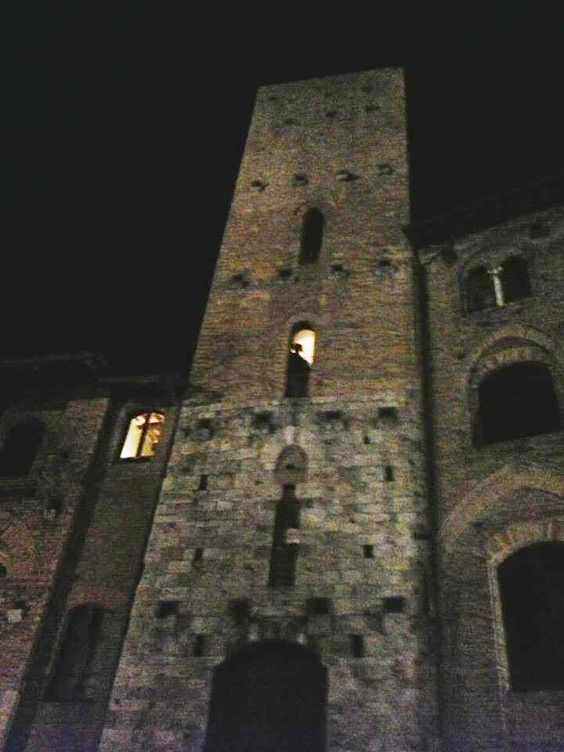 The Towers already alone tell us about the face of San Gimignano, and together with these speak the towers, gates, sources, tanks, old narrow winding cobbled streets, the houses and tower-houses  of 1200 and 1300. If people began to turn to the street in its ancient and beautiful traditional costumes, the climate and the medieval life would be perfectly reconstructed.

This is San Gimignano: the medieval charm and beauty, the unchanged language of every home and every street, the time away that stopped on every wall and every corner, make San Gimignano a small but precious jewel of Tuscany known all over the world.

The city takes its name from the Holy Bishop of Modena, Gimignano, which would save the city of San Gimignano from the barbarian hordes. Its demographic and commercial development was favored for its beautiful location along the Via Francigena or via Romea, the famous road that connected Rome to the most important countries of Europe and representing the development of that era trade (the year 990). 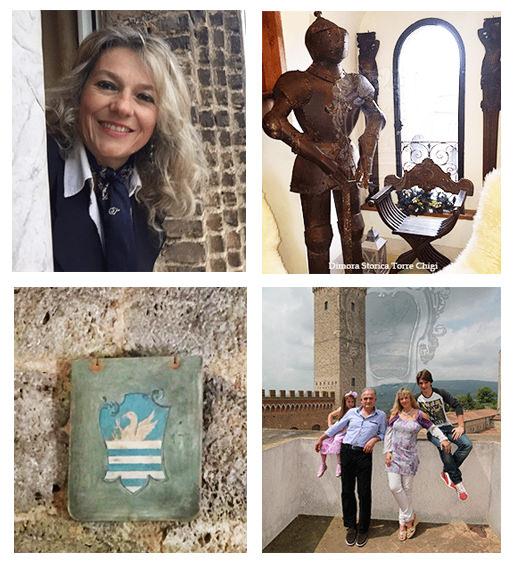